Other factors that influence how you react to drugs/medication:

The idea behind precision medicine and PGx is to select the right dose of the right drug for the right patient at the right time.

Right now, when a doctor prescribes a drug, there are many options to choose from, which one the doctor chooses is largely due to her experience in practice on which drugs were effective for her patient population in the past. However, efficacy may vary widely and adverse affects are common and unpredictable. The doctor’s drug choice is also influenced to some degree by pharmaceutical reps and how well they market their drugs to doctors. What drug the patient ends up using is a trial and error process, the doctor prescribes something, the patient tries it out for a certain amount of time, and if the side effects are too great or if the medication isn’t effective, another prescription is given until the patients condition is being managed appropriately.

Pharmacokinetics (PK): what your body does to the drug

Pharmacodynamics (PD): what the drug does to the body

Together, variation in the genes that affect PK and PD influence the efficacy and toxicity of a drug.

The greatest hits in PGx

The gene TPMT is one of the very first examples of pharmacogenetics being used in the clinic. If you have the active form of TPMT, the drug gets incorporated into your DNA and has an effect. 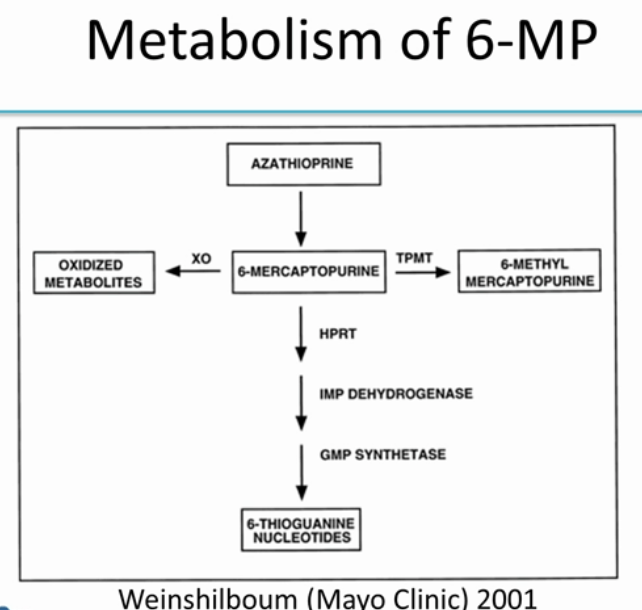 Azathioprine gets broken down into 6-MP.

Sometimes the drug that you take orally is taken in an “inactive” state, and needs to be metabolized to its active state. An individual’s ability to metabolize a drug depends on the form of CYP enzyme produced by their liver. Most people have active CYP enzymes, when they take medication it is broken down efficiently and there is no build up of medication in the body (no risk of overdose). If you have deficient CYP, you are not breaking down the medication in your body (leading to toxicity), or the drug may never be converted to an active form (the medicine doesn’t work).

Clopidogrel (brand name is Plavix) is an anti platelet agent used to prevent blood clots. Prevents people who recently had a cornary event from having another one (by making their blood less sticky).

Clopidogrel is an example of a drug that has to be activated in the body (metabolized) in order become active. Clopidogrel needs to be converted to an active metabolite by CYP2C19.

CYP2C19 is highly polymorphic.
CYP2C19*2 is the most common variant that affects the response to this medication.

For poor metabolizers, this means they will have lower levels of the active metabolite, leading to decreased platelet inhibition and greater platelet aggregation, and a high risk for an adverse cardiovascular event. The FDA knows about this and issued a box warning in 2010 stating that the drug is not effective at preventing coronary events in poor metabolizers.

Tests are available for the CYP2C19 genotype, and can be used to inform therapeutic strategy (prescribe an alternative drug), but right now, it is not standard of care to be tested if you are a poor metabolizer.

Codeine is a commonly used opioid. Codeine isn’t effective until it is metabolized into morphine, which provides the “pain killing” effect. CYP2D6 is the gene that produces the metabolizing enzyme that transforms codeine into it’s active form (morphine). CYP2D6 alleles are complicated, highly polymorphic (at least 140 known alleles). Depending on the variant of CYP2D6 that you have, you’re categorized as a “Normal”, “Intermediate”, “Poor”, or “Ultra rapid metabolizer”. If you’re a “poor” metabolizer, the codeine isn’t converted into morphine and you don’t get any pain relief.

If you’re an ultra-rapid metabolizer, the codeine can be converted into too much morphine (resulting in morphine toxicity). There was a case where a mother didn’t know that she was an ultra-rapid metabolizer, took tylenol, and produced way too much morphine. This didn’t kill her, because as an adult she has a higher tolerance, but it killed her infant because it was passed through to the breast milk.

Codeine is relatively accessible/inexpensive, was very commonly prescribed for a long time. Right now, The Academy of Pediatrics has decided it shouldn’t be used in children at all because of the lethality to children who are ultra-rapid metabolizers, it has been banned for use in children. However, to geneticists this is seen as a loss, since it codeine can be safely prescribed to be patients, if a genetic test is administered beforehand verifying that the patient is not an ultra-rapid metabolizer.

Credit for the good stuff goes to Anshul Kundaje and Dr. Michelle Whirl-Carrillo, PhD, mistakes are mine!